MDJN Mobile DJ Show North: This Sunday
#EVENTS | #MOBILEDJSHOWNORTH
Following the success of the Mobile DJ Show South event organised by Mobile DJ Network earlier this year, a Northern gathering of mobile DJs has been organised to take place in Doncaster on Sunday (the 13th of November 2016). Mobile DJ Show North will incorporate an exhibition of equipment alongside educational seminars and is open to all mobile DJs.

The venue for the event is to be Doncaster Racecourse, which will be open from 1pm to 6pm, with seminars running from 1pm to 5:30pm and the exhibition area open from 2pm until 6pm. The exhibition room will feature displays and product demonstrations from leading brands, niche suppliers and two retailers - Phase One and Discotechnology - who will be offering ‘show only’ deals. Exhibitors will include ADJ, inMusic (Alto Professional, Denon DJ & Marq Lighting), Chauvet DJ, Equinox, FBT, Laserworld, Mastermix and NADJ. Pro Mobile will also have a stand, so if you attend the event be sure to come over for a chat!

In addition to plenty of time for browsing exhibitors’ displays and networking with fellow visitors, the show will also include dedicated slots where a representative from each exhibitor will have the chance to talk about and demonstrate their products. As it is Remembrance Sunday, the event will also be raising money for the Poppy Appeal, with collectors on site.

Speaking about the southern event Mobile DJ Network’s Pete Williams said, “I was amazed by the amount of DJs who turned up for the classes and I'm excited that we've got some new speakers for the northern event: Robert Griffiths, Sam Hart and Jack Wilson are all new to the MDJN learning zone. It’s really encouraging that so many DJs want to learn more and progress and these shows help us all achieve that.”

The following educational sessions will run throughout the day:

“What pleased me most was the very positive atmosphere from DJs at the south show, said Mobile DJ Network’s Robert Griffiths. “Now it is time to show that northern-based DJs are just as proactive. MDJN is best-known for the Facebook group it sponsors and Facebook groups, by their very nature, can be a breeding ground of negativity, critics and - let’s be realistic - unfortunately trolls. However, the show was as far removed from that as is possible! The event really lifted my spirits as many people came up to me and the Admin Team and said they loved the group and the show was far better than they imagined, the positive energy in the rooms was palpable and very invigorating. The MDJN North Show is a step into providing this positivity and real networking for a northern audience, I would really advise anyone in the north to try to make this amazing event specifically for Mobile DJs.”

Tickets are free for members of Mobile DJ Network and just £3 for non-members if booked in advance online or £5 on the day. Parking is also free for all and a licensed bar will be open throughout the show. 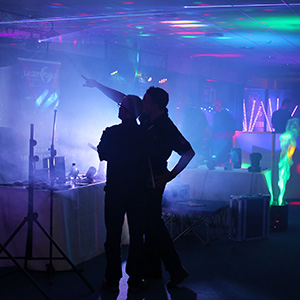